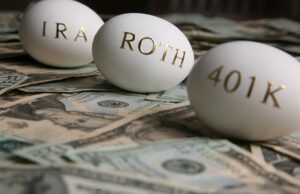 Let’s start here, even if it is an odd way to start: Money is money. It’s used to fund your life while you’re earning money and when you are not. In your financial world, you are allowed to earmark money for a particular purpose, such as retirement, whether the financial services industry registers that account is a “retirement account” or not. Brilliantly, one client called hers “my safety accounts” — accounts she has for when she needs money, which will most probably be when she is no longer working for a paycheck.

Where folks get twisted up is when financial professionals and institutions use “retirement accounts” to denote accounts like 401ks, 403bs, 457 plans, 401a plans, individual retirement accounts, and their Roth counterparts. Then they use phrases like “individual account” or “joint account” or “trust account” to denote every other kind of account. The technical then collapses with the colloquial and everything gets more confusing. Investors think, “What? I can’t use my brokerage account to fund retirement?” Of course, you can.

But there’s been so much emphasis in the financial retail markets on “funding your retirement account,” that the general public has been trained to want one or several of these. Job seekers are trained to ask if the employer if a retirement plan is provided and if there’s a match. Legislators make them mandatory. Investors love to hail or complain about them at cocktail parties. But there is no requirement that you own one. Plenty of people fund their retirements quite well without one.

Most people have a combination of “retirement” and “non-retirement” accounts as the financial industry would categorize them. If you are earmarking money in an account for a particular purpose, that’s totally fine and your business. What’s critical is getting the right investments inside the right wrappers.

Think About Money as Candy in a Wrapper

Non-Roth retirement accounts have ordinary income wrappers and lots of rules.  Non-Roth retirement accounts are your employer retirement accounts (most commonly 401ks, solo or individual 401ks, 403bs, 457s), your individual retirement accounts (IRAs), and your self-directed IRA accounts. They share these characteristics: They are funded with pre-tax dollars, the money grows tax-deferred, when money is withdrawn it is taxed at ordinary income rates (as if you can earned it on your job, with only one exception), if it’s withdrawn before 59.5-years-old it’s also penalized, and you must start taking money out at 72 years old because the governments want their share (and the governments always get their share). Pass these assets to beneficiaries and they will pay the taxes due.

Roth retirement accounts have tax-free wrappers and fewer rules.  Roth retirement accounts were named after the US senator that championed their creation. Most employer retirement accounts, IRAs, and self-directed IRAs have a Roth counterpart. They share these characteristics: They are funded with after-tax dollars, they money grows tax-deferred, and so long as you wait until after 59.5 years old to withdraw money, the money is not taxed. Withdraw it before 59.5 years old and pay penalties. There is no requirement to pull money out at any age. If you pass these along to beneficiaries, they do not pay taxes, either.

Non-retirement accounts have mixed tax wrappers and few rules.  Non-retirement accounts share these characteristics: They are funded with after-tax dollars. They are considered “taxable accounts,” which you can think of as “taxes happen on sale or income transactions.” What kind of tax you pay depends on the type of money you made. If you own dividend-paying stocks, those dividends are taxed, typically as ordinary income when you receive the income. If you own bonds that throw off interest, you also pay ordinary income taxes on that income unless those taxes are waived at the federal or state level or both (e.g., municipal bonds).

If you buy a stock, it grows in values, and you sell it, you are taxed on a capital gains basis (long- or short-term). Buying and selling an asset in less than a year’s time is taxed at short-term capital gains tax rates, which is typically the same as ordinary income rates. Buying an asset and selling it after a year and a day is taxed at long-term rates, which is often lower than ordinary income tax rates.

Now that you understand the tax implications of these various accounts, or wrappers, you can now wisely place various assets in each.

When you are reviewing your account statements, look at what you own, think about the tax implications, and reallocate to get assets (all that yummy candy!) into the right wrappers.

Lanning Financial Inc. is a registered investment adviser. Information presented is for educational purposes only and does not intend to make an offer or solicitation for the sale or purchase of any specific securities, investments, or investment strategies. Investments involve risk and unless otherwise stated, are not guaranteed. Be sure to first consult with a qualified financial adviser and/or tax professional before implementing any strategy discussed herein. Past performance is not indicative of future performance.